Virtual Reality is one of the most popular trends right now. From utopian dreams to dystopian nightmares, everyone has a vision (no pun intended) as to how virtual reality is going to shape our future. In this post, I want to make a quick introduction as to what virtual reality could mean for independent and creative artists and how it may impact our careers in the near future. 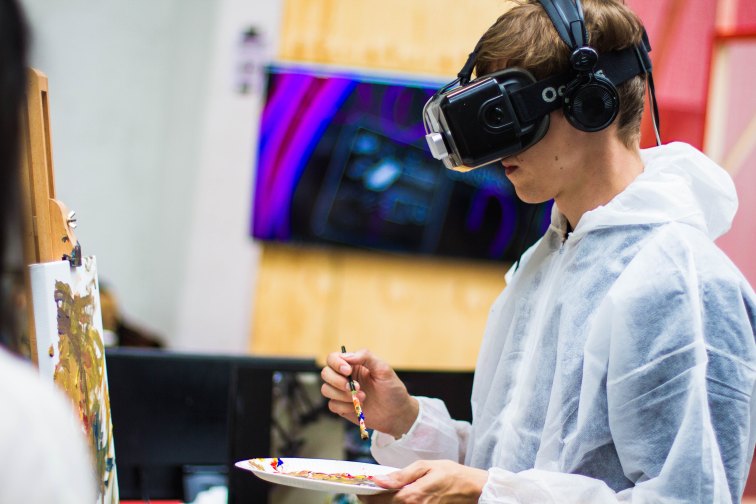 Virtual Reality in its truest essence, aims to put the consumer within a constructed and curated experience so resembling to reality, that it heightens similar emotions. This notion is exactly where it gets its name from. You put on the VR headset and suddenly you’re in a new place or you’re travelling in time. I tested out Facebook’s Virtual Reality program back in November 2016 in New York during a public display in Bryant Park. When I put the headset on, first I was taken to a desert in Africa. Then I was taken to the dinosaur age and faced a T-Rex!! Then I was taken to a waterfall in South America. It was amazing and it was scary at the same time. What I saw felt very real. Surely, one can not help but think, “Are we finally about to live in The Matrix?”.

My second thought from this experience was – how did they capture the sound so realistically? How is the vision so real? How is this possible? It is apparent that to create such a realistic experience, you need incredible cameras and designers working on to perfect the visuals as great as possible. I know a graduate student from MIT Media Lab who works on making virtual reality movies for the last 3 years, and I noticed that I did not understand the importance of this work until now. Then we have the sound. It is a really challenging task to recreate reality, especially from an audio perspective, perhaps it is harder than the visual side of things. Surely you need great microphones to record sound. But you also need to have incredible sound designers to create such realistic experiences.

From the music industry perspective, VR has lots of potential. As the trend of visual albums grow, such as Beyonce’s Lemonade, Jay-Z’s 4:44 and Frank Ocean’s Endless we’re moving towards VR music videos where artists can create full fledged experiences for their listeners. These can vary from music videos where fans are simply a part of the video, or gamification models where fans are actively playing a role within the music video. Fans can interact with their favorite artists’ avatars, which would be controlled by AI. Beyond music videos, live show experiences can be recreated where fans are playing on the stage with the band or by bringing deceased artists together with alive ones.

These technologies can also be applied to movie industry. With VR, people can become a part of their favorite movies and act in them. This would have a huge effect like fantasy series like Star Wars, Lord of the Rings or Harry Potter. The magic of these movies can be enhanced to full fledged VR experiences.

Interestingly, VR could potentially solve the issue of how artists get compensated for their work in digital age. The new file format .bc proposes using blockchain technology to encode artists’ rights metadata encoded to the file. The idea is that, unlike mp3 or other digital audio formats, the file could not be played without acknowledging compensation, and the blockchain would also manage payments (even micro payments) to the various rights holders.  As VR gets frequently used in the near future, we could see many VR apps being released with the .bc format, which could start something new.

What could VR mean for the independent artist is still a big mystery, as creating these types of videos are currently only available for high budget production shops. With an investment of $3000, it is possible to get some equipment for shooting 360 degree videos, which could be a start. But that would not necessarily fall into the VR realm. In other words, every VR video is comprised of 360 degrees, but not every video that’s shot in 360 degree angle is VR. This is an important distinction to make. I think it will be fascinating to see more affordable tools, software and apps to create VR environments for independent artists in the near future. But there is definitely lots of potential in the world of VR that could be highly beneficial to both artists and consumers.

Have you experienced VR before? What are your thoughts on the potential of VR for independent artists?

Adva Mobile is a marketing services and technology company for creative artists. Using Adva’s mobile services, you can let your fans about your latest creative work, run contests, take surveys, reach out to your superfans and engage with them.

Visit www.advamobile.com to view our video!

Alper Tuzcu is a Berklee College of Music and Denison University alumni, and a Boston based guitarist, songwriter and producer. His new EP ‘Lines’ was released on November 2017 and his debut eclectic album ‘Between 12 Waters’ featuring 8 different vocalists is available on Spotify. In addition to being a musician, he regularly teaches workshops and masterclasses internationally. You can follow him on Instagram or Twitter, and for more information you can visit his website www.alpertuzcu.com